Damien ‘Sugar’ Vegas during a recent workout in Las Vegas ahead of his May 7 return in Colorado (Photo: Chris Robinson) 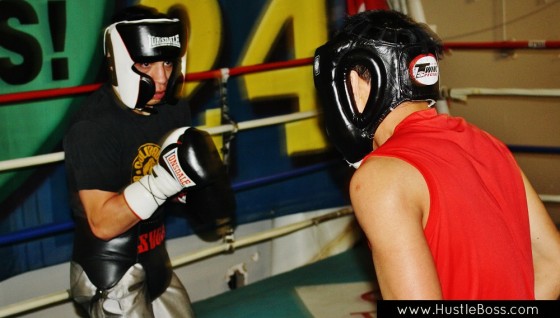 When I caught up with Damien “Sugar” Vasquez recently in Las Vegas, he was putting in some tough work with  top contender Joebert Alvarez from the Philippines.

At the time I was unsure of any set return date for Vasquez, but it appears now that the 18-year old NABF junior flyweight champion has something lined up.

Stephen Johnson at InsideBoxing.com recently reached out with the news that Vasquez (8-0, 3 KO’s) will be headlining a May 7 event from the Best Western Plaza Hotel & Convention Center in Longmont, Colorado titled “Coming Home: A Night To Remember”. The show is being put together by MGM Promotions in association with Golden Boy Promotions and will help celebrate the Cinco de Mayo weekend.

There is a vast pool of talent that will be on display on May 7, including undefeated Cuban middleweight Inocente Fiz (19-0, 13 Ko’s), undefeated Cuban featherweight Yanquiel Leon (2-0, 2 KO’s), heavyweight contender “Bronco” Billy Wright (52-4, 43 KO’s), as well as Italian super middleweight Luca Podda (7-0, 3 KO’s).

Fans in attendance will not only be able to view seven live bouts, but they will also get to enjoy, at no extra cost, the Saul “Canelo” Alvarez vs. Amir “King” Khan pay per view showdown that is airing that same evening.

Vasquez’s father and manager Oscar has teamed up with trainer Tony Aguilera in assembling his stable, as May 7 is just a highlight of what to expect in the future from his core group of fighters.

The bouts of Vasquez and Fiz will serve as the evening’s main and co-main events, respectively, with other local attractions slated for action. Denver junior lightweight Misael Lopez from the Denver Boxing Academy, who makes his pro debut on March 19, will fight, as well as Longmont bantamweight Freddy Marquez (1-0), from Ghost Town Warriors.

Five-time (featherweight and bantamweight) World Champion Israel Vazquez (44-5, 32KO’s) will be in attendance as well, doing televised promotion for this show on Telemundo, Univision and KDVR FOX 31 in Denver.

Doors open at 2 pm, with the first bout starting at 3 pm. The Canelo vs Khan bout is scheduled to begin at 7 pm.

Tickets go on sale Tuesday, March 22, at TicketsWest outlets. Stay tuned to Hustle Boss in the coming weeks for more news as May 7 draws near. 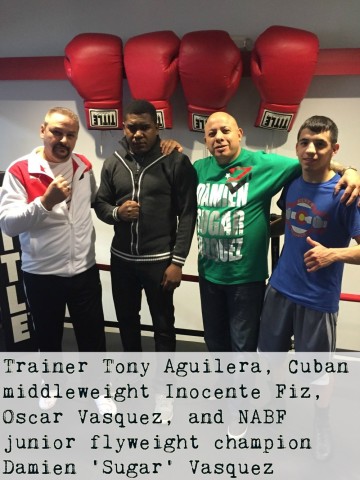 Chris Robinson can be reached at CRobinson@hustleboss.com